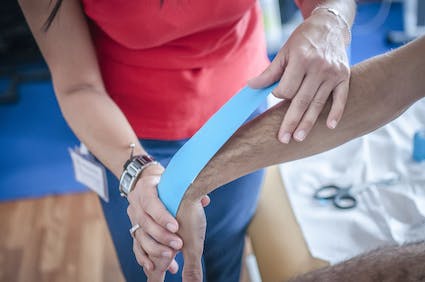 Kinesio® Tape was invented by Japanese chiropractor, Dr. Kenzo Kase, in 1979, as a result of much research in kinesiology, the science behind muscular and skeletal movement. Dr. Kase developed both the method and the first elastic therapeutic tape, Kinesio Tape. He also founded Kinesio, the company behind the product, in the 1980s, and formed the Kinesio Taping Association (KTA) in 1984. Kinesio USA, LLC, began operating in 1994, headquartered in Albuquerque, New Mexico.

Kinesio® Tape is a latex-free, elastic porous cotton strip with an acrylic adhesive used for treating athletic injuries and a variety of other physical disorders. Kinesio® Tape stretches up to 140% of its original length, which allows much greater range of motion, compared to traditional white athletic tape. It can also be left on for longer periods of time (up to 4 days) before reapplication is needed. Kinesio® Tape is about as thick as human epidermis (skin) and is designed to mimic its elastic properties to alleviate pain, reduce inflammation, relax muscles, enhance performance, and help with rehabilitation as well as supporting muscles during a sporting event.

The Kinesio Taping® (KT) Method is the rehabilitative application of Kinesio® Tape to facilitate the body’s natural healing process while providing support and stability to muscles and joints without restricting the body’s range of motion as well as providing extended soft tissue manipulation to prolong the benefits of manual therapy administered within the clinical setting.